As part of the Northern Images Festival, Ulysses Castellanos and soJin Chun will be conducting a casual artist talk and reception (party) before the screenings begin that evening. This is all part of the Downtown Gallery Hop so there will be all sorts of things happening. See you there. 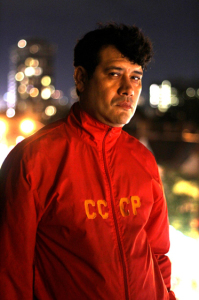 Born to a long line of artists, musicians, writers and intellectuals (he is the grandson of celebrated concert pianist Angelita Garcia Peña and Colonel Arturo Castellanos Contreras, who was honored in 2011 as one of the “Righteous Among The Nations” by Yad Vashem for his humanitarian efforts during WWII) Ulysses Castellanos developed an interest in art, music and literature at an early age. This interest led to extensive studies in film and music history, musical composition, visual arts and acting, manifesting itself in the multiple disciplines that Ulysses pursues (music, acting, critical writing, painting, filmmaking, videoart) and that he combines into elaborate installations, two-dimensional works, sculptures, videos and performances.

In 2008, Ulysses completed the Telus Interactive Art and Entertainment Program at the Canadian Film Centre, where he worked with physical computing and interactive technology to create USB – powered interactive sculptures. He is a member of the IKT International Curator’s Association, Luxembourg, as well as The Society of Composers, Authors and Music Publishers of Canada (SOCAN). His work is shown extensively in galleries and screenings throughout North America, Europe, Latin America and Asia. In 2012 he completed Eco Hotel 2, a full-length mystery thriller set in the Colombian Jungle with a cast made entirely of resident artists and local people from Residencia en La Tierra, Villavicencio. His full-length feature film Minimall Cop 2, shot on location at Cree Nation of Wemindji in Northern Quebec, and featuring Cree youth as its cast, will debut at Alucine Latin Film + Media Festival in April 2014. His most recent exhibitions include End of The Century and Dynamic Equilibrium at Georgia Scherman Projects, Toronto, Error: Origen no Encontrado at El Museo del Banco de La República, Bogotá, Colombia, Architecture of Boom at Attic Gallery, Taipei, and Taipei Ninja (in collaboration with three Taiwanese artists) at Instant 42, New Taipei City. Ulysses is the recipient of many awards, including grants from the Canada Council for The Arts, The Ontario Arts Council and The Toronto Arts Council for his performance and media works. He is represented by Galería Anomalía, Mexico City. 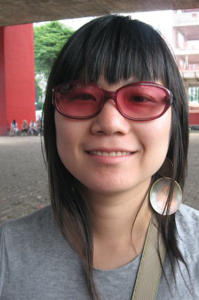 SOJIN CHUN:
soJin Chun is a Toronto-based artist working in photography, video and installation. Chun’s experience living in the Korean diaspora in Bolivia and Canada influences her work, which looks at the idiosyncratic moments of everyday life in its inconclusive and contradictory nature.

Through artist residencies in Serbia, Bolivia, Brazil and Taiwan, Chun has developed a personal style of storytelling using humour to reveal complex social issues. Chun has participated in video screening and exhibitions in Bolivia, Brazil, France, Sweden, Germany, Sweden, Spain, South Africa, Taiwan and the U.S. Most recently, soJin exhibited at the Bienal de Artes Visuales de Santa Cruz (The Biennale of Visual Arts in Santa Cruz, Bolivia) at the Museo de Arte Contemporaneo (Museum of Contemporary Arts); she received one of the Top Ten awards for the best projects in the biennale. In November of 2013, Chun had a solo exhibition at Tragaluz Digital in Santa Cruz de Tenerife, Canary Islands, Spain as part of Fotonoviembre, a Biennale photography festival. Chun’s video works are represented by GIV (Montreal), and V-Tape (Toronto). She has recently been accepted into the Artist Pension Trust, one of the largest global collections of contemporary art.

Chun has a B.A. in Applied Arts from Ryerson University and a Masters in Communications and Culture from Ryerson/York Universities. Community-based pedagogy is also part of her art practice, as she programs and teaches educational workshops to youth, and adults. She is currently the Head of Education and Community Outreach at Gallery 44 Centre for Contemporary Photography in Toronto, Canada.