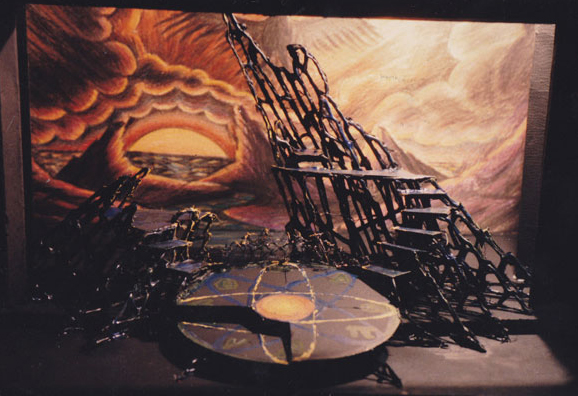 Opening Reception April 25th @ 7:30pm
April 25, 2014 – May 24, 2014
The local art scene in North Bay, Ontario is a vibrant and thriving community of creation and presentation. During the past 30+ years, Arndt von Holtzendorff has worked, lived and breathed life into our local culture in many ways. As a Set Designer he has volunteered for countless theatre productions enabling hundreds of artists to realize their visions on stage. As a community supporter and activist he has towed the line for our arts community through dedication and perseverance in many, many roles. In many ways, Arndt is North Bay’s best kept secret. This exhibition of works celebrates his achievements as an artist, designer and as a key part of our local arts ecology. To celebrate North Bay’s culture and heritage is to also celebrate Arndt.

Biography: Born in Winnendan, Germany while his mother was visiting relatives in her home town, Arndt landed on Canadian soil and came to his home in North Bay, Ontario. He was creative from an early age.  He began with what he called his “books.” Empty space on top for drawing, lines below for text, he wrote several.  He recalls inventing his own super hero, Supercat, and wrote a “book” about the war between the cat planet and the dog planet. He would go on to design and draw plans for Amphibio, his submarine/aircraft/ground vehicle. It was this early experience with plans that made it so easy for him to learn drafting in his university design classes.

Adolescence. It began with spacecraft and science fiction, and progressed further and further away from it as he determined to become an actor. Around the age of fifteen he had begun getting involved in theatre. He had no idea it would become such a large part of his life. He just knew he loved acting. But somehow he began to design. He saw a sketch of a set and added a few touches that would make it more evocative.  He began to design and design more.  His love for acting was still strong, but it was for his designing, in this case The Farm Show (a Canadian collective creation) for which he would win the award at the 1981 Sears provincial high school drama festival. He went on to York University for acting but it was in a Second Year design course that he was recognized as having potential as a designer.  Phillip Silver encouraged him to try out for the design program at the National Theatre School of Canada (NTS).  He did and was accepted.

Around the same time Arndt and some like-minded friends started Unicorn Theatre in North Bay. It was a student summer theatre troupe that would run for five successful seasons.  With NTS during the school year and Unicorn Theatre in the summer, his early twenties were intense and very busy.  Upon graduation from NTS, he made his professional debut in Toronto designing Joe Orton’s What The Butler Saw for Derek Goldby, an internationally renowned director he had worked with in his final year at NTS. He went on to do three more shows in Toronto, all to good reviews, but it had been too much for him and he suffered a breakdown and had to return to North Bay to recover. It turned out the breakdown was schizophrenia and a professional career now seemed impossible.

But there was a very lively amateur theatre scene in North Bay with such groups as the Gateway Theatre Guild, Dreamcoat Fantasy Theatre, TOROS, and the Sunset Players. He has done many shows with them. And, to his pleasure, he has ended up having many professional designing opportunities in North Bay, notably with the Nipissing Stage Company (1999 to 2005), Rep 21, and various Ontario Arts Council projects.

In 1994 Arndt won the Best Director Award at the QUONTA Drama Festival for The Importance of Being Earnest. In 1999 he won Best Design at the same festival.  In 2010 he designed a Group of Seven influenced production of Waiting For Godot that won best production at the Theatre Ontario Festival. The bleakness of the terrain suited Godot well. He remains passionate about design and currently has a show on the boards, The Drawer Boy, for the Gateway Theatre Guild.