For the past two years Kevin Smith and Dermot Wilson have been performing a series of sound and video works collectively called, We Claim Anonymity. The performance work employs several laptop computers, video projectors, musical instruments and amplified voice. The collective is exploring new ways of employing text and recorded voice in their performance and installations. Starting from an appreciation for traditional sound art and noise music (especially the fluxus artists, Nihilist Spasm Band) Smith and Wilson incorporate a “noise aesthetic” into their performances and attempt to combine video imagery with the semi-atonal music created during performances, found online, in nature or created with various digital sound production software. 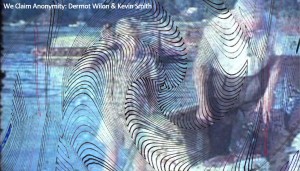 As part of the Festival of Alternative Art in Sudbury, We Claim Anonymity will be performed as four original works that incorporate found sound from the FAAS site. Using video shot on site and layered into pre-constructed video works We Claim Anonymity creates a three dimensional projection site in the FAAS provided space. The performances in the cage-like cell provided will present these new works on the first night of the Festival. Throughout the rest of the festival a recorded remnant of the performance will be available which will include all of the projected imagery and a recording of the performance.