White Water Gallery is excited to present Elinor Whidden’s “Voyageur” project at FAAS 5: Abricadabri in Sudbury, from May 4-7, 2016.

Whidden will break camp at the FAAS parking lot to trade with the locals and portage along sections of the Trans Canada Highway’s Voyageur Route. Her car-carrying adventures are often ridiculous and futile, but they articulate what she sees as the flawed relationship between humans and the automobile. Scavenging both from the colonial pages of history and the scrap yards of our present day she re-stages contemporary versions of historical moments to question our nostalgia for these fictional narratives.  Whidden’s work suggests that the colonial attitudes employed during the opening up of the Western Froniter remain with us today, underpinning our desire for the freedom and romance of the open road. 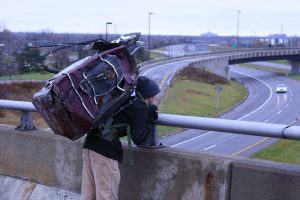 Artist Elinor Whidden uses humour, heroics and history to critique contemporary car culture. Dressed as a modern-day Voyageur she turns old cars into canoes, knapsacks, snowshoes, walking sticks and other modes of transportation used during the opening of the Western Frontier. These objects are then portaged, dragged, or carried along early fur trade routes. During these car-carrying performances, the waterways and trade routes of this historic period stand in as the forefathers to our current system of highways, freeways and over-passes.

Thanks to Swift Canoe & Kayak for generously sponsoring this presentation! 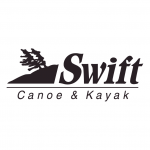