Closing reception with the artist: Friday September 28, 7-9:30 pm as part of the Gallery Hop 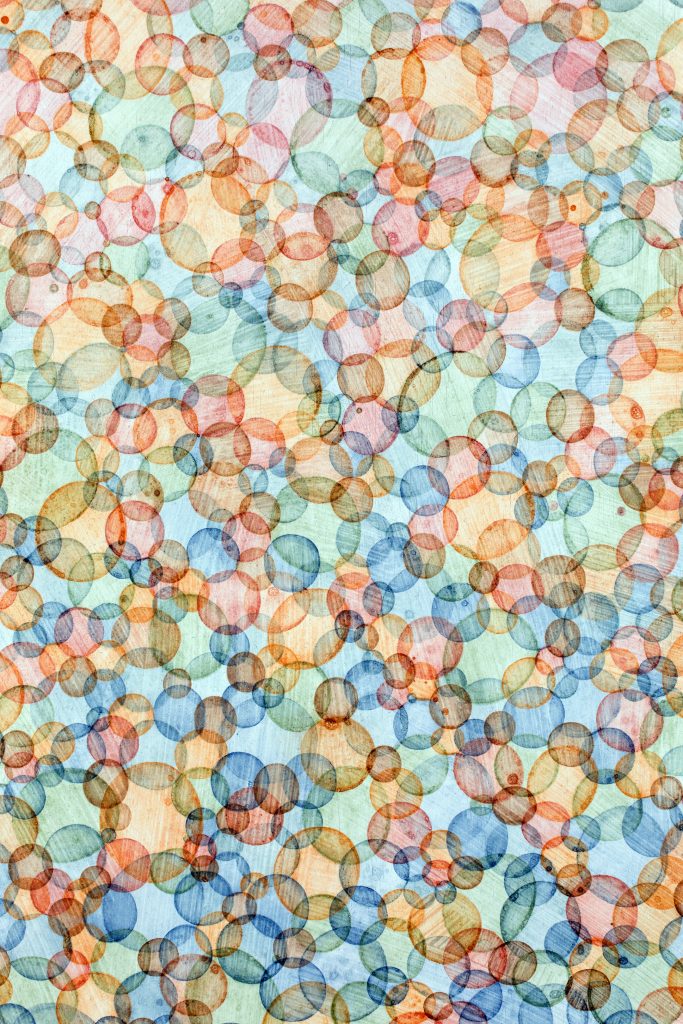 This exhibition explores an under-examined motive for discomfort with breastfeeding: that it is a powerful display of human interdependence. I also intend the project to raise questions about the politics of milk, women’s breasts and the use of public space.

Roman Charity consists of a series of wall-hung works comprised of mixed media portraits and large non-representational paintings. The portraits are executed on wood panels and on fabric. Both series are created with handmade milk paint -some of which incorporates outdated breast milk which would otherwise be thrown away. The large non-representational paintings are comprised of colourful, overlapping drops. The medium-sized portraits utilize silkscreen printing to depict mothers who have covered their faces instead of their breasts while breastfeeding. They are based on photographs that circulated on social media in protest to admonishment that mothers should cover up while nursing in public. I have obtained permission to use these images. The exhibition also includes a triptych of self-portraits nursing my daughter (for her last nurse), printed on fabric.

In preparation for this project I acquired 1 gallon of outdated breast milk with which to make my own paint. As a member of the milk-sharing community (for babies who are in need of donated breast milk) I have access to outdated human milk. Casein protein in all milk carries lime-proof pigments which permanently bind to rigid, porous surfaces such as wood panels. I create my paints traditionally using powdered organic pigments. Milk paint is extremely durable and (prior to casein frescoes of ancient Egypt) a 2015 University of Colorado study found that it was used 49,000 years ago before the domestication of animals. For the first time, it is now considered possible that prehistoric cave paintings may have been executed in breast milk paint.

Discomfort with breastfeeding may arise from the fraught nature of human milk as a substance that is both nourishing and abject, or an inability to view breasts outside the scope of sexual gratification. Women’s breasts are ubiquitous in media and advertising, yet lactating breasts are pictured (if ever) solely within the private sphere. To avoid stigma lactating women often recreate domestic sequestration within the public sphere under nursing covers –the only instance in which western women veil themselves. My primary concern however, is to explore an under-examined motive for discomfort with breastfeeding – that it is a powerful display of human interdependence.

Picturing the absurd disruption of normal human interdependence may expose the limits of traditional identity construction as unitary and autonomous. I intend my images of breastfeeding mothers who have covered up their faces to point to the fact that all disembodied public relations between ostensibly free and equal citizens presuppose private ones and indeed rely on their existence. This raises questions of value that affect all citizens – not just breastfeeding mothers and babies. I am interested in how both the milk and the feeding relation effectively disrupt extant separations between sexuality and maternity, public and private, self and other on which our liberal individualist culture is founded.