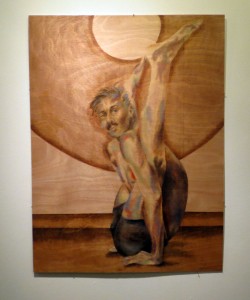 The work Yoga Feline shows a man in a strenuous yoga pose but is also questionable as it is similar to a typical hygienic routine pose of a cat. By the combination of humanistic and animalistic acts, I am questioning what it is to be human as the capability to understand ‘otherness’ is beyond our capacity as human animals.

In examining relationships and power binaries between the non-human animal and human animal, I disregard social values of humanism in order to produce work that emphasizes the other side of the animal-human divide.