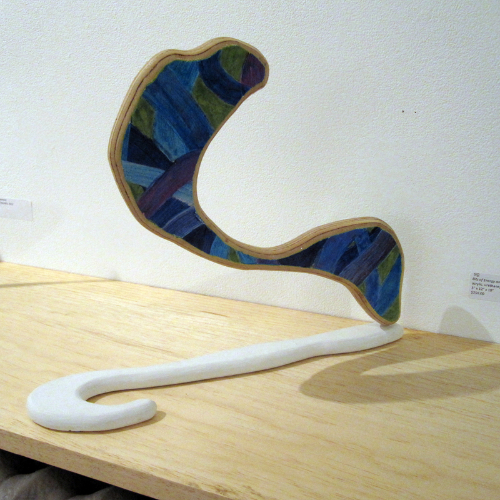 Sio’s work is centered on drawing, branching out into painting, wood fabrication, mixed media, group projects and performance.  His art reflects something which is in perpetual flux, working with the ever-changing moment as a direct source of inspiration while exploring the human condition.

During a year and a half drawing meditation on nothingness titled “The Infernal Machine” the concept of “Split-Into-One” (Sio) formed out of the chaotic pen scribble. Having adopted it as his artistic identity it serves as a reminder in the creation of his work that separate and opposing forces are part of a unified whole. With this in mind in 2010 he began exploring the notion of reality as a fluid mass of individual yet interconnected parts always changing and moving. His latest body of work Fluid Shapes interprets the theme through abstract exploration of fluid shape, colour, line and technique.

Dodalism, a term he began applying to his creative process since 2003, is informed by eastern philosophy ideas such as “no mind” and western Jungian theories such as that of the collective unconscious. Through an amalgamation of techniques like stream of consciousness, freestyle, automatic creation, and meditation the chaotic stimuli of everyday existence is focused and distilled through a desired theme/idea. This process streamlines creativity by shifting the focus from logic and ego, refocusing on the moment at hand and the immediate action of doing.