Nick Scarfone has created an entire fantasy-like environment in ‘The Party,’ and has constructed a complete civilization of characters to inhabit his make-believe land. This imaginary world of painted trees, grasses and playful skies, is not all it appears to be, as the cold metal hidden below the surface glistens through occasionally, hinting at the barren earth that is housed underneath.

The infertile metal surface of Scarfone’s alternate world may be viewed as merely an interesting surface to work on. Utilitarian, perhaps, as it creates the magnetic field between the metal sheet and magnet backs of the painted figures that gives the artwork the desired level of interactivity intended by the artist. 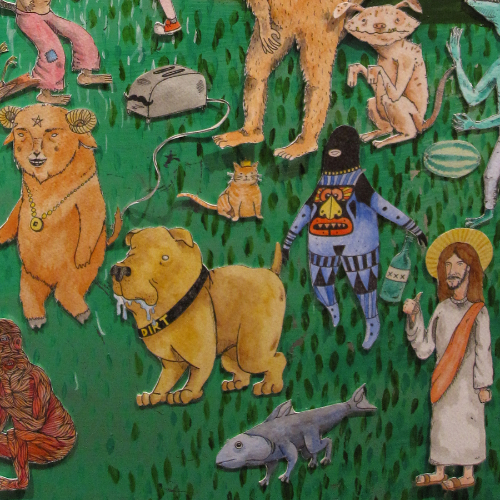 The figures themselves seem to be quickly painted together; sketches and doodles that have come to life mimicking imaginary child’s play. ‘The Party’ is fun and comical and just asking to be played with, inviting the viewers themselves to play along. But beneath the quirky figures and tongue-in-cheek title there is seriousness to Scarfone’s work that points out societal errors of today’s modern civilization and its behavior and reflects upon our introverted practices of overthinking and overanalyzing and being generally overcautious. 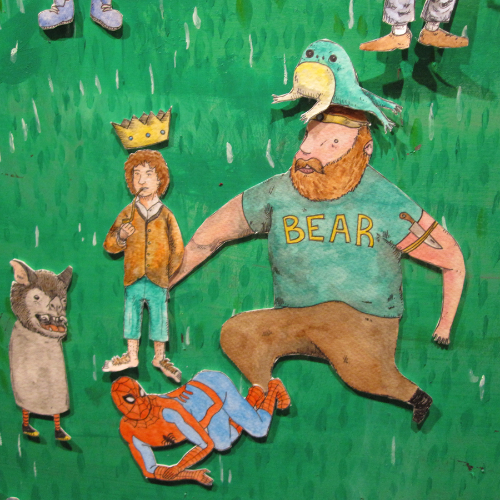 Incorporating images from his dreams, figures and symbols from his imagination, and appropriated characters derived from cartoons and satiric movies, Scarfone creates a setting of interaction and ‘partying’ to reinforce the idea of nonsensical behavior without reason or logic and to reject outright today’s culture of structural thinking and rigid planning. Currently, we live in a society where attachment parenting is a religion, our neighborhoods are deemed dangerous and deadly, and where protocol dictates action; a society where imagination and child’s play seem oddly out of place. 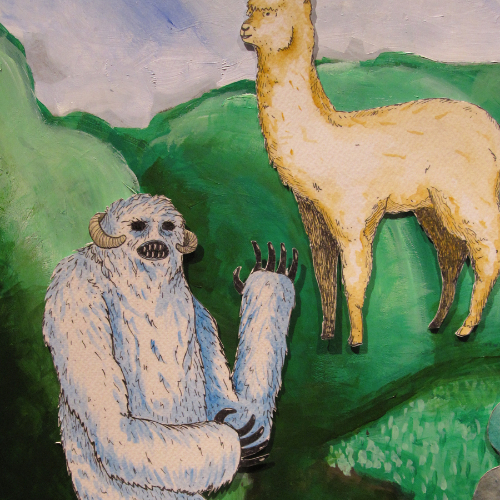 ‘The Party’ has introduced a fantasy world free of guidelines and logic, free from the proper art practices of perspective and proportion, that invites the viewer to create dialogues, collaborations and relationships between the characters and the space they inhabit. And while the figures seem carefree and enjoy freedom of mobility as they travel across their given landscape they are forever attached to only those surfaces constructed of cold sterile metal. The figures themselves are trapped within their own boundaries of rules and protocol and in turn create rules and protocol and boundaries for the viewers who interact with them. 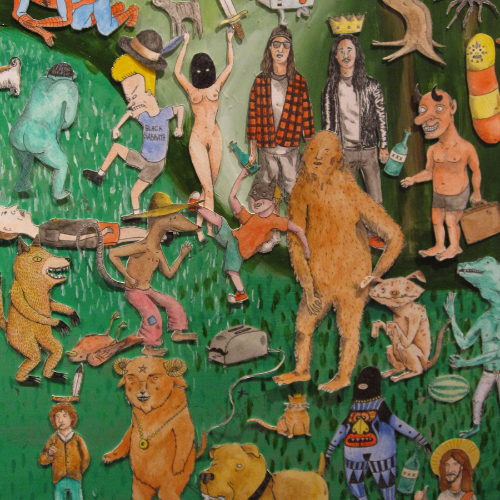 Nick Scarfone’s statement, “What one might find within these pieces filled with characters, narratives and symbols really only tells the viewers more about themselves,” begins to ring honestly. ‘The Party’ doesn’t so much tell us something new, but reflects and becomes a focal point for what is taking place in society presently and to indicate faults and misgivings that continue to be played out.