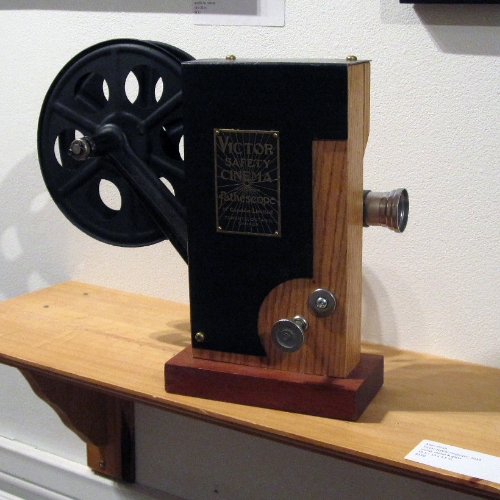 My artistic process begins with a wide search for found objects, discarded pieces of wood or used interesting pieces of hardware. Yard sales, flea markets and cluttered antique stores are investigated with a particular eye. The patina, shape, rarity and perceived elegance of an object are all taken into account. The joy of the hunt and the excitement in the find becomes part of the ongoing historical narrative of each piece.

Each artifact will rest for a while in a cluttered, but organized workshop until its new calling becomes apparent. A central idea will generate a process of assembly in which objects are added or taken away with the goal of intuitively improving what the eye sees.

The Victor Safety Projector was produced in the USA from 1917 to 1924. It had black cast iron parts and projected 28 mm film. I came across a few left over pieces from an abandoned model and incorporated them in my found art sculpture. The piece speaks to both the history of film and its modernization. Digital film projection no longer requires a reel to reel mechanism. The single reel in the sculpture is able to spin if it is powered by hand. I like the interaction between the viewer and the piece. It allows a projection of the imagination into past and future film images.