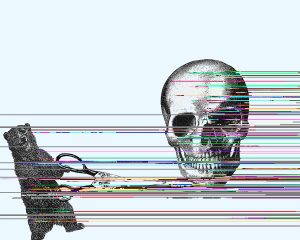 An onoing project, THE HEX IS ON is a website of quickly-made and never second-guessed animated GIFs. Originally created as a response to news headlines, each animation serves as a reminder of the moment described in the original headline that inspired it. By transforming the context of the headline into something else, animations comprising THE HEX IS ON were made as a way to work through the often complicated and seemingly never-ending deluge of content put into the world via news media. Researched, created and posted online all within the same day, each GIF is titled via date in order to point back toward its moment of both inspiration and creation. Operating as a sort of sketch book the GIFs document an experimental process, one that considers the benefits the animated GIF can offer both formally and conceptually as a medium during such fast moving and politicized times. www.thehexison.com

Artist’s Biography:
Originally from Edmonton (AB), Christina Battle is currently based in London (ON) Canada. Her research and work consider to the parameters of disaster; looking to it as action, as more than mere event and instead as a framework operating within larger systems of power. Multidimensional by definition, disaster is seen as a series of intersecting processes including social, environmental, cultural, political, economic, and technological which are implicated not only in how disaster is caused but also in how it manifests, is responded to and overcome. Battle’s research considers the ways in which disaster as both subject and framework might be utilized as a tactic for social change and as a tool for reimagining how dominant systems might radically shift. Especially interested in how our engagement with media shapes our understanding and interpretation of information, her current research focuses on thinking more critically about the tools of technology, especially social media, as part of contemporary language and considering how the information disseminated via online platforms operates within the framework of disaster. She has exhibited internationally in festivals and galleries, most recently at: Nuit Blanche (Toronto), Galveston Artist Residency (Texas), Studio XX (Montréal), Le Centre des arts actuels Skol as part of Le Mois de la Photo à Montréal (Montréal), Thames Art Gallery (Chatham, ON), Casa Maauad (Mexico City); and SOMArts (San Francisco). Christina is a contributing editor to INCITE Journal of Experimental Media, and current collaborative projects include: re:assemblage with Scott Miller Berry; and SHATTERED MOON ALLIANCE with Serena Lee.