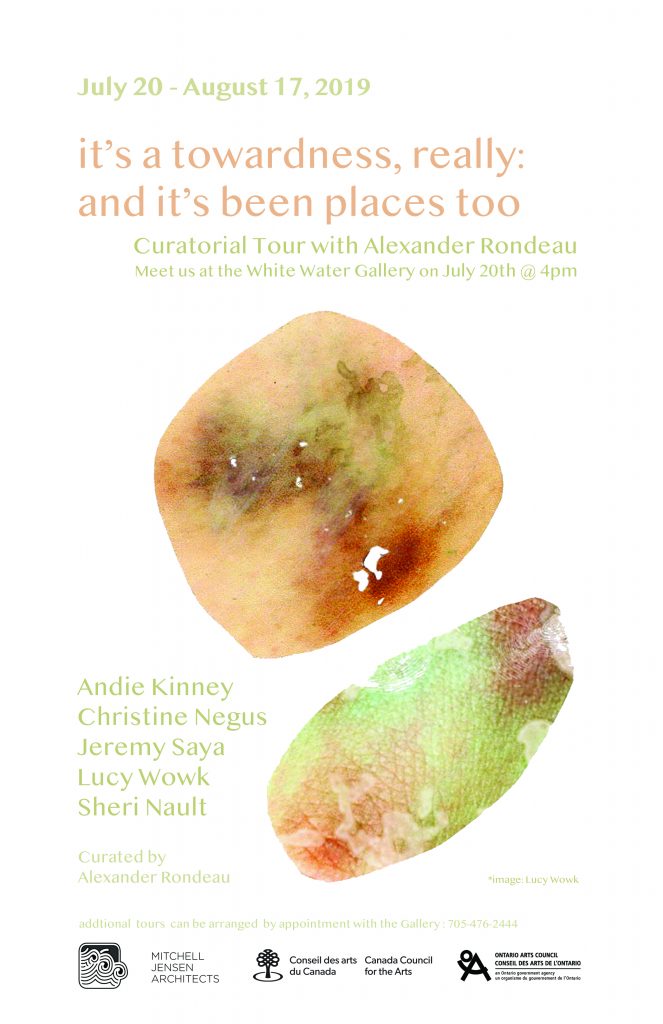 The White Water Gallery presents it’s a towardness, really: and it’s been places too, from July 20th to August 17th, 2019.  Works by Andie Kinney, Christine Negus, Jeremy Saya, Lucy Wowk & Sheri Nault will be installed in 5 different locations across the downtown area.   Meet us at the White Water Gallery (122 Main St. E, North Bay) on Saturday July 20th at 4pm for a curatorial tour led by curator-in-residence Alexander Rondeau, followed by a get-together at the Boat.

it’s a towardness, really: and it’s been places too contends not only with queerness as it arrives and presents itself to us, but also the distance it has travelled and the ways in which it has changed through contact with the world; people; spaces; places; generations; systems; institutions; and prolonged meditations with its own self. Together, the works of Andie Kinney, Christine Negus, Jeremy Saya, Lucy Wowk and Sheri Nault offer tender, humorous, and deeply personal meditations on queerness and environment as seen through different considered reflections of isolated body parts.

Andie Kinney is an emerging queer indigenous artist living in North Bay, Ontario. Andie employs an interdisciplinary practice of writing, painting, sculpture and experimentation with video to bring forth the true power, strength and incredible resilience of queer indigenous and Two Spirit people.  Andie is currently completing their studies in Fine Art and Gender Equality and Social Justice at Nipissing University and is a member of the Art Fix Organization Collective and the Two Spirit Peoples of Nipissing Collective.

Christine Negus is a multidisciplinary artist and writer employing humour and irony to investigate nostalgia and loss. Her works range from ephemeral objects, including glittery party banners, neon signs and artificially-flowered memorial wreaths, to single-channel animations and videos that are all steeped in a sweet sadness.  Christine received her MFA in 2010 from Northwestern University in Chicago, Illinois and her BFA from the University of Western Ontario in London, Ontario in 2008.

Lucy Wowk is interested in moments of encounter between ethics and aesthetics. With a background in graphic design and academic research, their work and skills are founded in intersections of visual representations and interpretations. Lucy is currently completing an M.A. in Communication in Culture at Ryerson University and York University, exploring the relationship between photographic practices and experiences of mourning and dying. Research interests include ephemeral longing, desire, poetics, and technologies of representation.

Sheri Osden Nault is an artist of Métis and mixed European descent. Situated within personal and political contexts, their art practice and research are grounded in queer, feminist, and Indigenous world-views. They strive to elicit a sense of social and ecological responsibility and intimacy on a damaged planet, recently focusing on connections between bodies, sexuality, and nature. They received an MFA from York University in 2017 and their BFA from the Alberta College of Art and Design in 2012.

Alexander Rondeau is a queer, Francophone, interdisciplinary artist and curator from rural Northeastern Ontario currently based in North Bay. Rondeau holds a BFA in Image Arts: Photography Studies from Ryerson University. His curatorial practice largely considers the understanding of artistic and cultural productions in relation to place and space and the potential of intervention through incidental encounters. His ongoing research contends mainly with site oriented display strategies in public spaces informed by Northern and/or rural regionalisms as seen through a queer understanding.  Starting September 2019, he will be entering the Criticism Curatorial Practice graduate program at OCAD University.