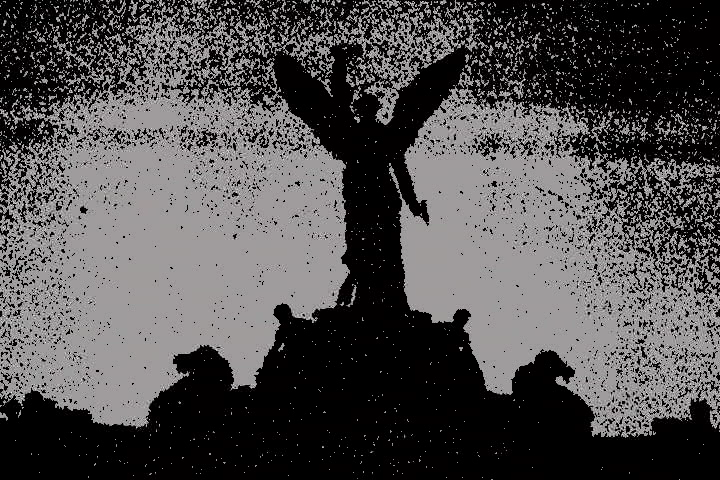 Made one year after SARS crisis, the video re-visits the images collected from the Toronto and the international media. Through all black and white. Re-photographed pictures, all we can see is the darkness of a time passed, a city under panic attack, politicians scrambling for words, physicians looking for remedies, citizens living in a state of fear, distrust, paranoia and shame. How are we to make from those few months that seemed to last forever? As if we were in the dark ages, at the time we thought we would never come out of it again.

The video, by portraying the weakness in the human nature, looks at the hysteria created by technology in our contemporary world. If the media is the message, the video questions its biases and truthfulness? In order to create this uncomfortable time, the video is purposely made in total silences to reveal the sense of self-doubt, disgust and the feeling of almost approaching a state of abjection.

Using video technology but referencing the languages of experimental films, In the Dark also pays homage to the avant-garde filmmaker Stan Brakhage (1933 – 2003), who passed away about the same time as the SARS outbreak.

Ho Tam was born in Hong Kong, educated in Canada and the U.S. and worked in advertising companies and community psychiatric facilities before turning to art. He practices in multiple disciplines including photography, video, painting and print media. His first video, The Yellow Pages, was commissioned by the public art group PUBLIC ACCESS for an installation/projection at the Union Station of Toronto in 1994/95. Since then Tam has produced over 15 experimental videos. He was included in the traveling exhibition Magnetic North: Canadian Experimental Video by Walker Art Center, Minnesota. His feature documentary film “Books of James” was awarded Outstanding Artistic Achievement (Outfest, LA) and Best Feature Documentary (Tel Aviv LGBT Film Festival). He also publishes several series of artist’s books and zines. Currently based in Vancouver, Tam is an alumnus of Whitney Museum Independent Studies Program, Bard College (MFA) and recipients of various fellowships and artist’s grants.
ho-tam.com
hotampress.com