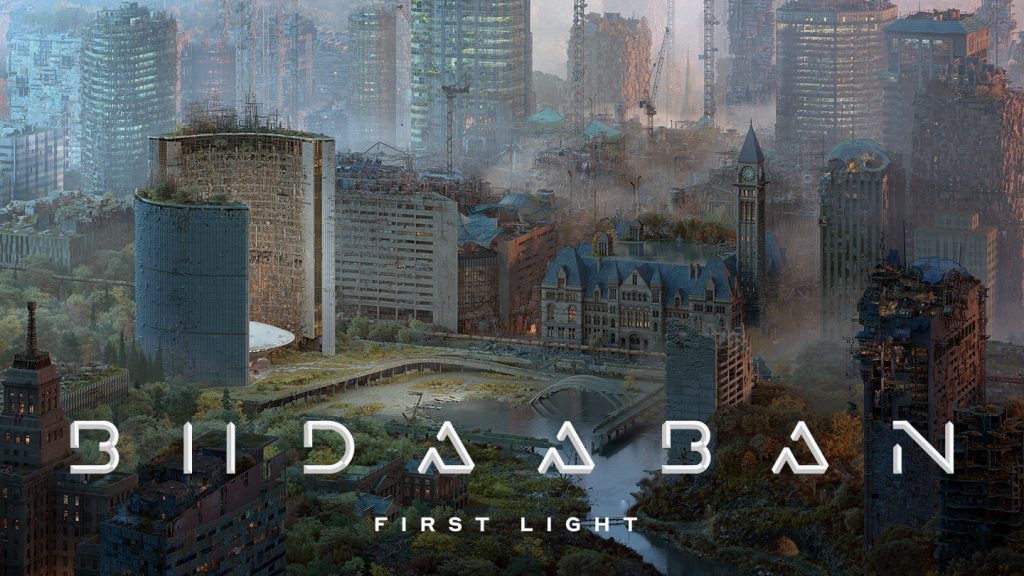 A large urban city is flooded. Its infrastructure has merged with the local fauna; mature trees grow through cracks in the sidewalks and vines cover south-facing walls. People commute via canoe and grow vegetables on skyscraper roofs. Urban life is thriving.

Rooted in the realm of Indigenous futurism, Biidaaban: First Light is an interactive VR time-jump into a highly realistic—and radically different—Toronto of tomorrow. As users explore this altered city now reclaimed by nature, they must think about their place in history and ultimately their role in the future.

Language carries the knowledge of its speakers. Indigenous North American languages are radically different from European languages and embody sets of relationships to the land, to each other, and to time itself. But as Indigenous languages face the risk of disappearing, we risk losing what they have to teach us.

Biidaaban: First Light asks users to think about their place in history and their role in a possible future. As they move through a highly realistic future Toronto reclaimed by nature, they hear the languages of the place originally known as Tkaronto. Through gaze-based interactions, users engage with the written text of the Wendat, Kanien’kehá:ka (Mohawk) and Anishinaabe (Ojibway) and gain insight into the complex thought systems of this land’s first peoples.

Lisa Jackson (Anishinaabe) is one of Canada’s most celebrated contemporary artists working in film and VR. In Biidaaban: First Light, Lisa joins forces with 3D artist Mathew Borrett to create a future for Canada’s largest urban centre from an Indigenous female perspective.

This presentation of Biidaaban: First Light would not be possible without the generous support and production of the National Film Board.