“The Social Life of Beads” – artist talk by Bev Koski 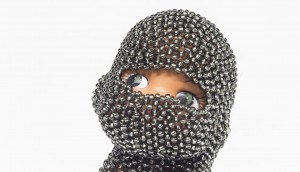 Recast suggests the changing of roles often associated with theatre or film, or the remaking of something. This exhibition presents Christian Chapman’s video collaboration and Bev Koski’s photographic series to consider how meaning shifts with the recasting of narrative and objects. Chapman invites Sébastien Aubin’s and Caroline Monnet’s media art collective AM, filmmaker Marja Bål Nango, and artist Nathan Young to join him as each edits super eight footage of a self-taught Woodland painter living in the bush. This experiment of outcomes reveals multiple roles of an artist. Koski’s photographs of tourist kitsch figurines peering out from under beaded covers creates new personas for caricature depictions of Indigenous North Americans. These larger than life portraits give new meaning to the objects they represent, performing new roles and declaring an unexpected presence.

Bev Koski is an Anishnabekwe artist who lives in Toronto. She is a graduate of the Ontario College of Art and has a BFA from York University. Koski was involved with 7th Generation Image Makers, an art and mural programme for Indigenous youth run by Native Child and Family Services of Toronto. She currently teaches beading at the Native Canadian Centre of Toronto, among other places. She is a constant beader and occasional artist.  She

Christian Chapman is of Anishnaabeg heritage from Fort William First Nation. His interests include painting, printmaking and film. Chapman uses storytelling as a main theme in his practice to compose his images. The act of storytelling has been an important part of his life: it has informed him of his culture by shaping his identity and personal experiences.

With a Bachelors of Fine Arts (major in Graphic Design) from the University of Québec, Sébastien Aubin has worked for Kolegram, one of the most prestigious graphic design studios in Québec, and has since shaped his professional career as a freelance graphic artist. Aubin has done publications for numerous artists, organizations and art galleries in Winnipeg, Montréal and Ottawa, including Plug In ICA Close Encounters, the next 500 years, Terrance Houle, KC Adams, Carleton University Art Gallery, Thunder Bay Art Gallery, and Art Gallery of South Western Manitoba. Aubin is one of the founding members of the ITWÉ collective that is dedicated to research, creation, production and education of Aboriginal digital culture. Currently based in Montréal, QC, Sébastien Aubin is a proud member of the Opaskwayak Cree Nation in Manitoba.

Nathan Young is a multidisciplinary artist working in the mediums of film, documentary, animation, multi-media installation, and experimental and improvised music. Young’s filmmaking focuses primarily on health and social issues in American Indian communities and his films have screened in international film festivals as well as having been featured in the National Geographic All Roads Film Festival and the Smithsonian National Museum of the American Indian Film + Video Festival. He received his Bachelors degree in art history from the University of Oklahoma. Nathan is of Pawnee, Kiowa and Delaware decent.

Caroline Monnet (1985) is a self-taught multidisciplinary artist of Algonquin ancestry from Outaouais, Québec. Her work demonstrates a keen interest in communicating complex ideas around Indigenous identity and bicultural living through the examination of cultural histories. Monnet has exhibited in Canada and internationally in such venues as the Palais de Tokyo (Paris) and Haus der Kulturen (Berlin) for the Rencontres Internationales Paris/Berlin/Madrid, Toronto International Film Festival, Aesthetica (UK), Cannes Film Festival (not short on talent) and Arsenal (Montréal). Monnet lives in Montréal and is also a founding member of the Aboriginal digital arts collective ITWÉ.

Marja Bål Nango is an Sámi artist and filmmaker from Galgujávri in Norway. Nango attended Nordland College of Art, Film and Film & Television studies in Lillehammer University College and studied film producing at Sámi University College. During Riddu Riddu Indigenous Festival 2011, she was the young artist of the year, with a solo-exhibition of art and her own film program. In 2012, Her short film for children, Juletrollet (The Christmas Troll) was purchased by The Norwegian Film Institute and screened in children’s short film program at cinemas all over Norway. She is now working on two different film projects with a three year film grant, a documentary project and a longer film script.

Lisa Myers is of Anishnaabe ancestry from Beausoleil First Nation and the Georgian Bay region. She grew up in Milton, Ontario. Myers earned her Master of Fine Arts in Criticism and Curatorial Practice at OCAD University and continues her research as an independent curator. Myers has curated exhibitions at the MacLaren Art Centre and the York Quay Centre at Harbourfront in Toronto. She lives and works in Toronto and Port Severn, Ontario. 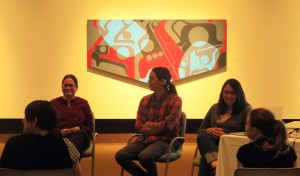